It has been over a year now since my crash on August 30, 2018. The road to recovery from a severe traumatic brain injury is long and challenging. Although my recovery is going incredibly well, I still have the final portions of it ahead of me. With that being said, it is with a very heavy heart that I am officially resigning from racing with the Canadian National Track Cycling Team.

The reason for my decision to leave racing, is a matter of my long term health. I want to live a long and healthy life, and racing poses an immeasurable risk, a risk I simply can’t afford to take anymore. All the medical professionals who I’ve worked with since my crash, have strongly advised me not to go back to racing with my long term health being the primary reason.

Racing on the track at the elite level and being in the high-performance environment on a daily basis has truly brought me so much in many areas of my life. All of my training, racing, and the mentality I’ve cultivated throughout it all, has been so instrumental in my recovery. The skills you learn in training and racing go beyond the act of riding a bike, they are applicable to the bigger picture – to life itself. On top of that, racing has taken me all over the world to amazing places, and along the way, given me amazing experiences with amazing people, all of which I am extremely grateful for.

Although my career was relatively short, it was indeed a very rewarding journey. It was very fulfilling, and one that I don’t have any regrets with. My career started in 2010 with the Juventus Cycling Club in Edmonton on the 1978 Commonwealth Games Velodrome at the age of 12. While my interest in track cycling grew, I continued to race on the road, mountain bike, and cyclocross. In January of 2015 I got the opportunity to wear the maple leaf as a junior at Cyclo-Cross World Championships in Tabor, Czech Republic. Later that same year I also represented Canada at the Junior Track Cycling World Championships in Astana, Kazakhstan. I then quickly realized that track sprinting was my strength. One year later in Aigle, Switzerland I became the Junior Kilo World Champion and also won a bronze in the sprint. Later on in that same year at the Pan American Track Championships in Aguascalientes, Mexico I set 2 new junior world records in both the 1 kilometre time trial and the flying 200 metre events. Two years later in the winter of 2018, I won silver in the keirin at the World Cup in Minsk, Belarus. Shortly after, I then competed in the 2018 Gold Coast Commonwealth Games for Canada. Being my first multi-sport games, it was truly a special experience for me. My track cycling racing career only spanned 3 years from August 2015 to August 30, 2018. Despite that it was nothing short of incredible, from the people I’ve met, to the knowledge I’ve learned, as well as the experiences I’ve had, all of which I am truly grateful for. 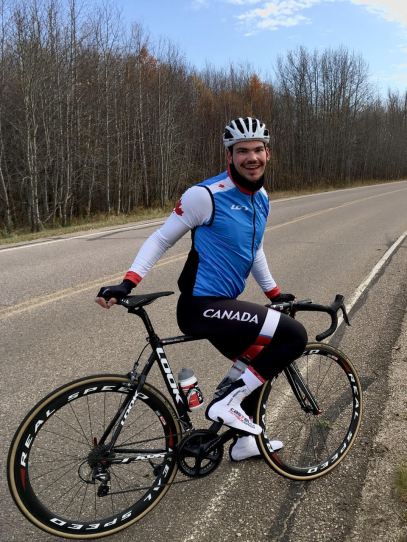 Here is a photo of me on a road ride I went on with my Dad before the snow came this fall. Going for rides and spending time in the gym, both of which I am really passionate about, are playing a vital role in my recovery. And as for the next step in my life, the plan is to first fully recover. Then I can honestly say I’m not sure which path I’ll choose or what my future holds in store for me. I’m still young, at 21 years old. I’ve got ideas and I’ve got options. But I’m still undecided as to which way I will go.

I would like to sincerely thank everyone from the bottom of my heart, for  all the support during my career, as well as all the encouragement, thoughts, and prayers for me after my crash. I will always look back at this part of my life very fondly, I’ve thoroughly enjoyed every second of it. But as this good ride comes to an end, it marks the closing of this chapter in my life as a track sprinter. At the very same time, new doors are opening for me. I find myself entering an exciting time, a renaissance, a new beginning, and I can’t wait to see where it will take me.

Links to articles relating to my leaving Elite Track Cycling: